One of the things I love about Minnesota summers is the weekend getaway, or as some people call them: runcations.  I love getting my miles in on the local trails but when the weekend hits it’s time to explore new territory!  Car camping is easiest for a last minute getaway, but backpacking is always a favorite of mine.  Heading up to the north shore is a popular destination and I’ve definitely spent many a night tucked under a sleeping bag listening to Lake Superior booming against the rocks.  But I recently went another direction, west, to a quiet State Park three hours from Minneapolis for an unassuming weekend of running.

I arrived at Glacial Lakes State Park in the rain, after checking in the Park Ranger said the rain would stop soon, so I drove to the horse camp and took a nap.  The rain stopped and that was the last of it for the weekend.  Scooping up my pack and dog, we hiked one mile into the first site that was down a hill next to a tiny lake.  We were the only ones camping in the park because my weekends are actually during the week. Being used to the dramatic falls of the north shore, I looked out at the open sweeping prairie, one of the last original in Minnesota, and knew I was in a special place.

The goal for the weekend was to get in miles, so I grabbed my hydration pack and started out on my first run.  Right away the wind was blowing gentle breezes which was great because the sun was out!  In every direction there was open prairie, without having to watch for rocks to trip on, I could run head up taking in all of my surroundings.  The paths are well marked, and the miles ticked by.  After cresting a butte, I turned a corner as gasped at the perfect blue lake before me.  Seeing the green and brown prairie for a few miles the bright blue lake was startling.  This is where the prairie slowly began to make its way into my mind.  The path drew on and I crested a hill to the highest point of the park.  Here I stopped to take it all in.  At some point Glaciers scoured the land and deposited debris to make the park that lay out before me.  It was so subtle, so unassuming, it felt oddly wild.  I headed toward the lake where I heard there were giant snapping turtles.  At the end of a dock I was lucky enough to see a giant dinosaur looking turtle dive to the bottom of the black lake.  With a few more miles left in my run, I headed toward the wooded section of the park and ran into some horseback riders.  Big thunderstorm looking clouds were rolling off in the distance, and I was again awed at how far  the landscape went!  The 14 mile run was complete as I got back to the campsite. 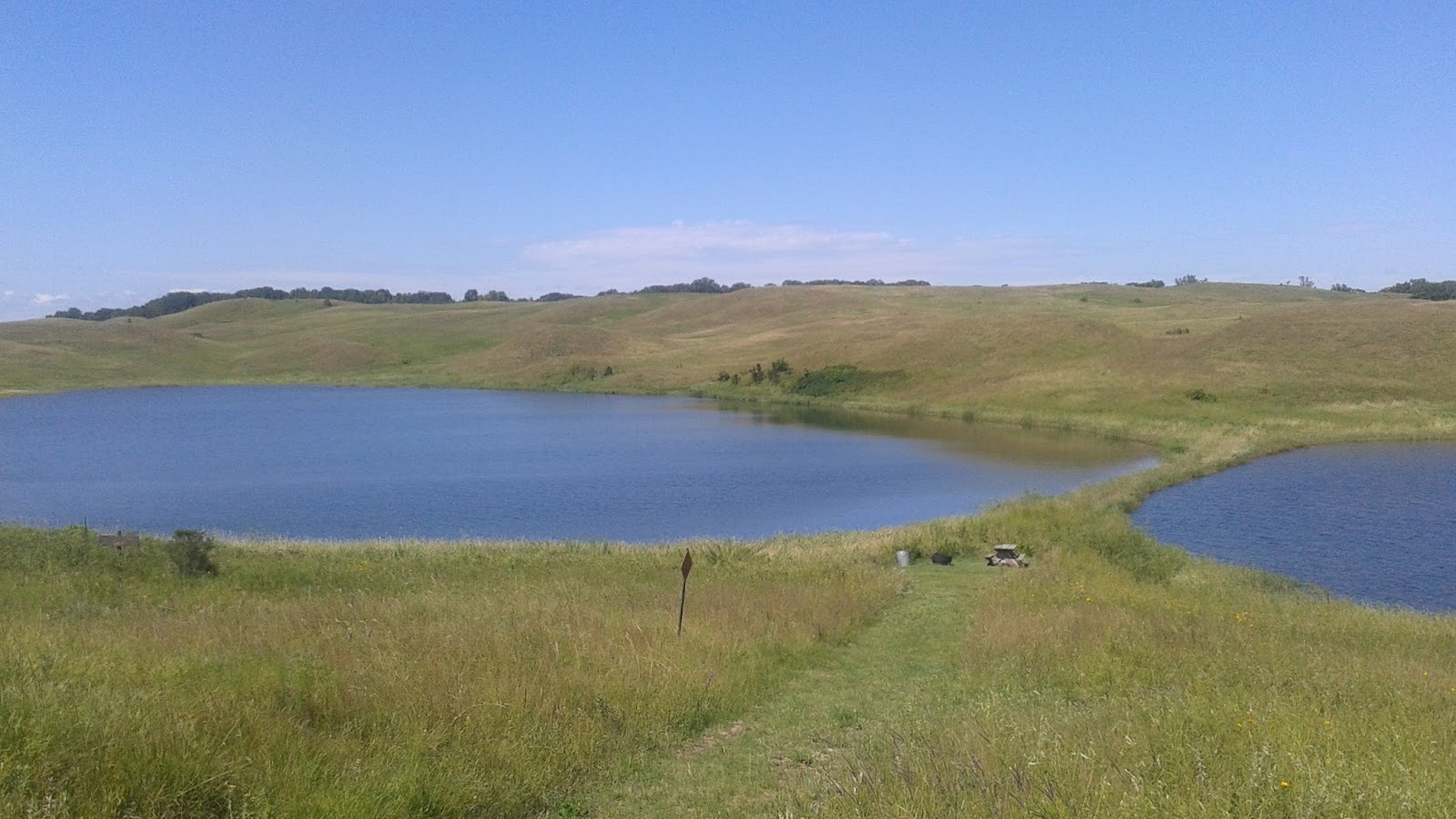 Enjoying my camp/recovery meal my dog and I got ready to settle in for the night.  I made some tea, and sat on the picnic table to watch the sun set.  The lake next to our campsite was practically chaos with happy bugs and birds getting ready for night.  The hills black now, the sky red, I watched two dear playing on the ridge, just seeing their silhouettes against the setting sun.  This place felt outside of time.  The prairie is not like the north shore, it is quite, slow, you have to like it on its own terms. And if you do, if you have the patience to watch, you get to see some amazing things.  After the clouds cleared the sky was now black with stars out in full glory, something this park is known for.  I slept with my tent open to the sky so we could watch the stars and the lake was alive all night with chirping and singing life.
The next day I ran around again, a little slower, and a little shorter.  I celebrated a good weekend of running by swimming in the big clean lake, before gathering everything and heading home.  Glacial Lakes is only three hours away but feels like a different world, I was happy to go in a different direction this time and run some miles in this quiet park. 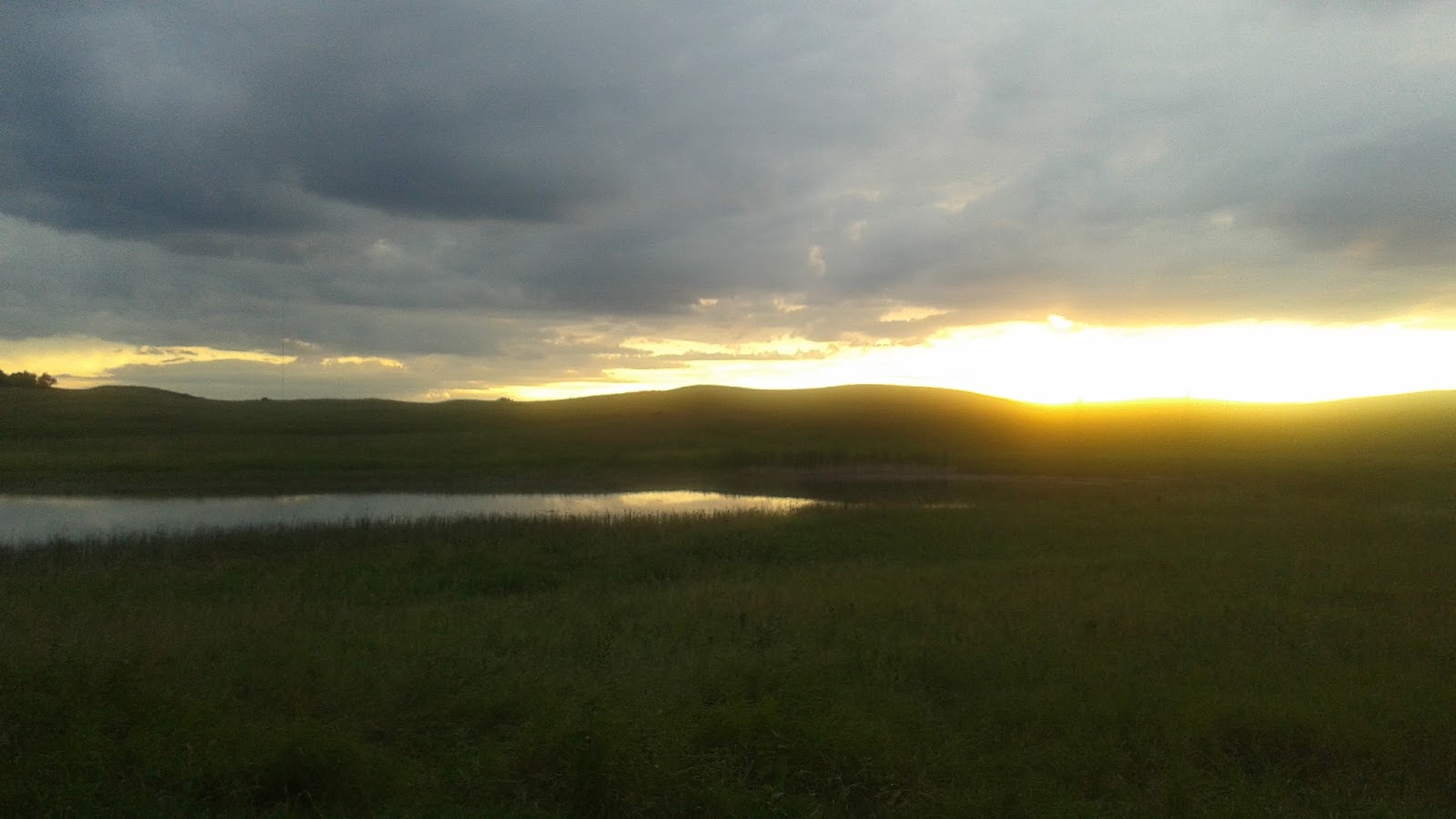